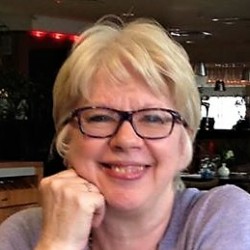 I was born in Seahouses, Northumberland, within sight of Lindisfarne, and was brought up surrounded with the stories of Aidan and Cuthbert all the Celtic saints and heroes! As a child of the manse, my childhood was spent moving around the country, and I was not to be re-acquainted with their legacy until much later...

I became a Local Preacher in 1987, a role which I have loved from the word go! After commissioning, I went on to further studies, and discovered, through the Spirituality module, many different spiritual traditions, including Northumbria, Iona, Taizé, etc, as well as all the riches of meditative and contemplative prayer, which as a cradle (Primitive) Methodist, I never knew existed!

Through the tutorship and friendship of Revd Mary Holliday (a founder member of the Methodist Retreat Group) I developed an interest in the Retreat Movement, and began leading retreats and quiet days on a regular basis. I became a member of the executive committee of Reflect in 2013.

I studied pharmacy at university, and went on to become a specialist in psychiatric therapeutics. I completed a BA in Theology and Religion at Oxford Brookes University in 2007; my thesis explored possible links between psychosis and spirituality.

I had the honour to serve as Vice-President of the Methodist Conference from 2014-2015.

It has always been a delight and privilege to me to lead people into silence, and share in the fruits of this profound prayer experience. My hope, as Chair, is that we can find ways of making spirituality more accessible within Methodism, particularly to lay people. There are various opportunities opening up, such as closer collaboration with the Discipleship and Ministries Learning Network, the Methodist Diaconal Order, Local Preachers and Worship Leaders, and the identifying and equipping of Spirituality co-ordinators within each Methodist district.